This post brought to you by a morning in the kitchen and 2 hours of podcast prep!

Well guys, it’s officially been a full week of #100DaystoOffload and #100DaysofHannah… Only 92 more days to go!
One of the perks of this quarantine life has meant that I have significantly more time to spend in the kitchen.
Okay, so I probably could have still been cooking/baking when working not from home – I just chose not to for the sake of time and convenience.
Besides, when you’re the only one eating the food – why waste all the time in preparation to sit down and eat it alone?
In any case though, with more hours in the day (thanks to nonexistent commute time and minimal effort in daily physical appearance), I’ve been able to get back in the kitchen.
And, not gonna lie, it’s been fun.
Now, for those of you who don’t know me, you should be alerted that I don’t believe in following recipes. Sure, I may use them as a general guideline, but making food is meant to be an artistic expression of oneself.  The bounds are meant to be tested.  After all, how can you truly understand something until you tear it apart, piece by piece, changing each component until something new is created?
The only problem? I’m really not that methodical.  Rather, I tend to dive in headfirst and figure I’ll learn as I go.
Which means that I rarely, if ever, think about what ingredients I may need before starting, and am much to impatient to pause and try to get them once the process is in motion.
Does this drive everyone else crazy? You betcha.
But, at least to me, the end product is all that really matters.  How it looks, and the path that was taken to get there are pretty irrelevant.
Today’s kitchen adventure started with apple pie (pictured below) in memory of my favorite redhead (and one of the best pie maker’s) birthday. However, I didn’t want to triple the fat content of the already high fat (though lower carb, thanks to almond flour) pie crust by using oil.  So, I added applesauce instead.  How much? No clue.  I just poured a little in and kneaded the flour until it was a spreadable consistency.
From there, I went to the filling.  The recipe called for lemon juice. However, I don’t own lemon juice.  The most acidic liquid I could find?   Wine. So, in went some moscato, a few shakes of cinnamon, a tablespoon or so of monk fruit sweetener, and a couple tablespoons of almond flour.
For the topping? I crumbled the remaining dough, threw on a handful of oatmeal, and added a few spots of butter.
When putting it in the oven, I forgot/neglected to put on anything to protect the crust on the edge, so that was a bit browned.  Nevertheless, the end product was delicious.
While browsing around the kitchen, I came across some frozen chicken that I had bought, well, quite awhile ago if I’m honest.  Though I try to generally not eat meat, I’m not one to waste food, so I decided to cook it up.  It looked mildly freezer burnt, so I decided to throw it in the already hot oven with the only sauce I could find – a jar of medium salsa… and a can of hard coconut mango seltzer.
Naturally, I didn’t set a timer, so I really have no idea how long it simmered. But, when I took it out of the oven halfway through the podcast prep, it was fully cooked, and smelled (and tasted) fantastic.
Admittedly, not all of my cooking adventures are successes.  But for today anyway, I’m grateful for time to experiment and thankful that my ridiculous substitutions turned out pretty okay.
‘Til tomorrow: May your dishes be clean, your recipes tasty, and your creativity unbounded.
-Hannah
Question of the Day: What is your favorite food to make?
Challenge of the Day: Find a new recipe (or non-recipe) and try it!
Photo of the Day:  Homemade apple pie.  ‘Til we meet again, Grandma 💕 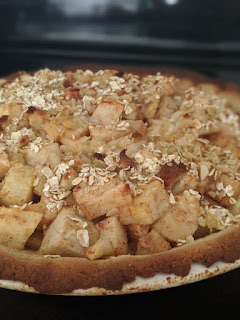