This post brought to you by too much thought, not enough action, and a complete failure of my daily routine.

Happy Sunday and Day 9 of #100DaysofHannah!

So,this is going to seem like a 180 degree turn around from yesterday’s post about going with the flow and just embracing the moment, but, y’all, I need a schedule.

And I never realize how much I need that schedule until it falls apart.

This morning, I slept in.  For the first time in around a month, I didn’t set an alarm to ensure that I was up at least an hour before the sun.  I’m not sure if I forgot, or if I just realized when going to bed last night that I should allow myself more than 5 hour of sleep.  Whatever it was, no alarm was set.

And so I slept.

Much to my dismay, this thinking was also paired with food (without a pre-emotive 7-10k of steps), which, again contrary to the vibe of yesterday’s post, is something I can really struggle with.

So, here I am, 4 hours later, blogging and running in place with seemingly nothing else to show for my day.

Am I overreacting? Absolutely.
Is that knowledge enough to get me out of my head?  Probably not.
Will life and the day go on? Well, yes.

‘Til tomorrow: May your thoughts be deep, your actions meaningful, and your hours well-spent.

Question of the day: What is the most important part of your routine?
Challenge of the day: Break up the monotony – find something to do today that you don’t normally do. (For instance, I expressed the existence of emotions to three separate people. Which, I think, is a new record.)
Picture of the day:  One of my favorite walls, thanks to some of my favorite people 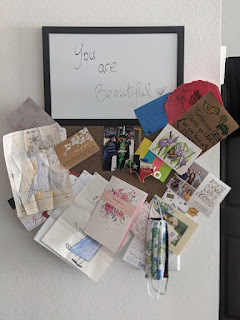