Twenty-seven days of #100DaysofHannah and #100DaystoOffload
Oh goodness – what to talk about today..

It’s been another day of posts flitting through my head, but significant uncertainty about what I want to say tonight.

So, I guess I’ll embrace the spirit of spontaneity and just dive in.

I was angry today.
I’d like to pretend it doesn’t happen often, but if I’m truly honest, I’m a much angrier person than I normally admit.

In theory, my anger today could probably be justified.
An repeated, undeniable, inexcusable error by the offending party prevented me from accomplishing a project that I value, leaving me frustratingly helpless.
And fuming.
How could such utter incompetence be possible – much less accepted?

As I sit back and reflect though, my anger was disproportionate.  Yes, the frustration was reasonable. But anger?  It wasn’t called for.

So then, why anger?
If it’s like normal, this anger was probably a culmination of events – carefully tucked away in a bottle of “no worries” and “it’s okay’s”.

Because life’s easier when it’s all okay.
There’s no need for confrontation.
There’s less pain without the sting of truth.
Maybe for once I can avoid the high risk stake of vulnerability.

And some days, it really is okay.
I try to understand.
I see my many flaws.
I’m not hurt – so, what’s to hide?

But some days, they’re just words – another phrase.

I’ve said it before, and I’ll say it again – emotions are not my strong suit.  I just don’t really know what to do with them.
And so, I shut them off or bottle them up.

Growing up, I can’t deny that I was an angry kid.
Some days it felt like that was my super power – like the Hulk, with anger in hand, I could conquer anything.
More often though, I knew it was one of my greatest weaknesses.

And so I tried to hide it – stuff it inside where all the other emotions knew to go.

But anger?  It always came back.
When stuffing failed, I ran.

I’d like to say that at some point it all changed – that one magical day my anger disappeared never to return.
But if I’m honest, the truth is that I’m still running – running from people, running from emotions.
Hiding in a new life, hoping that the anger of my past lags far behind me.

I’ll admit – I don’t like ending with imperfection, but I promised attempted authenticity.
So, here we’ll sit.

Question of the Day: What makes you mad?
Challenge of the Day:  Touch your toes
Photo of the Day: I didn’t take any pictures today.. So here’s a post-run pic from Sunday. Because, running. 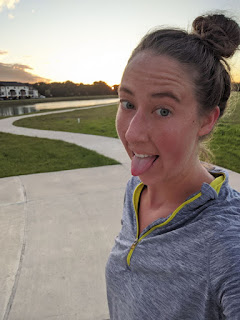