M is for Monday, memorial, motivation, modification, and Murph – all of which this post is brought to you by.

Today is Monday May 25th – Memorial Day here in the States.
Which means a holiday from the daily holiday of WFH life.
Normally, I’d be spending the day with family – grilling out, being active outdoors, maybe going to a Memorial Day service, and (on a good year) helping Dad in the fields.
But, we all know this isn’t a normal year.
Pre-COVID, I was supposed to be home this weekend – I had planned to take two extra days off work so that I could spend some extended time with loved ones… and have an early celebration of one of my favorite days of the yea 🙂
However, when the only direct flights home would be through a city that would require a 14 day quarantine upon return (therein ruining my current mandatory on-call schedule), plans change.
And so, rather than sitting around the table with the people that I haven’t seen in 5 months, I’m sitting in my house on the other side of the country, drinking my coffee, and enjoying an absolutely gorgeous (late) southern morning.
I guess this isn’t so bad.
A storm rolled through last night/this morning which cooled temps to the lowest they’ve been in days – a whopping 68 degrees – which provided the perfect time to complete my first ever (modified) Murph.
For those of you who aren’t familiar with Murph, it’s a CrossFit WOD, that is completed on Memorial Day in memory of Lt. Michael Murphy who was killed in action in Afghanistan in 2005.  The workout?  A 1 mile run, followed by 100 pull-ups, 200 push-ups, and 300 squats, and another 1 mile run – all in a 20 lbs weighted vest.
First off, some disclaimers:
1) I am NOT a cross fitter.
2) I have approximately NO upper body strength.
3) I don’t own a 20 lbs vest.
4) I don’t have access to a pull-up bar.
5) I like to work out, but I’m not in awesome shape.
Okay, now that we’ve got that out of the way, we can move on.
My idea to attempt the workout this year started about 3 weeks ago with Brooke Wells’ Murph prep challenge – 70 reps of 5 pull-ups (or burpees), 10 push-ups, and 15 squats over the course of a week. Easy enough, right? Okay, so I admittedly modified the challenge from full push-ups to “girl-style” to allow me to complete the reps (going from 0-100 full push-ups a day is a recipe for disaster), but hey, improvement is improvement.
After the week, my older brother pointed out that the whole point of the workout was to prep for the Murph.  A quick google search later, I was in.
Please tell me I’m not the only one who decides to do ridiculous things simply for the sake of being able to say that I’ve done them…
In any case, 3 weeks of “training” later (I have no idea how to train for anything – so I just did a bunch of reps every day for 3 weeks), it was time to try it.
Theoretically, the workout was supposed to be for time, but I told myself from day one that my only goal was to finish all of the necessary components over the course of the day.
But this morning as I contemplated when to start, I realized that I was too stubborn to throw time completely to the wind. So, I gave myself two hours (including an expected hour break) to complete everything in (beginner crossfitters are supposed to aim for an hour or less – oops).
Nearly 30 minutes and half of the workout later, my body called it quits and gave way to excessive muscle cramps.
Insert an hour break with more food, water, and painkiller (retrospectively, starting the workout without having anything to drink was probably a bad idea…)
With half an hour left in my allotted time frame, I started back in – determined to finish.
50 burpees, 100 push-ups, 150 squats, 1 mile, and exactly 30 minutes later,  I was done.
Total elapsed time: 2:03
Total workout time: 0:58
Admittedly, I was a bit frustrated by the need for a break in the middle – I had been hitting all of my goal times up to that point! But, despite the break and modifications, it felt good to accomplish something that a month ago would have been completely impossible.  A faster end mile and the physical exhaustion were just icing on the cake.
I obviously have no idea where I’ll be or what I’ll be doing on Memorial Day 2021, but a repeat Murph (with fewer modifications) will hopefully be on the list.
‘Til tomorrow – have a lovely Monday/holiday/Memorial Day!
-Hannah
Question of the Day: What workout challenge should I attempt next?
Challenge of the Day: Do 15 Burpees!
Photo of the Day: 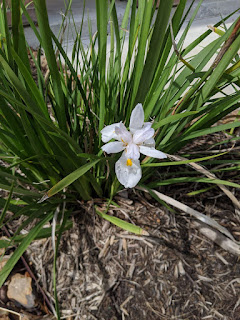