It’s Day 50 of #100DaysofHannah and #100DaystoOffload, y’all!
Which is sort of crazy to think about.
We’re halfway done with this insane challenge.  Then the question will be – do I continue blogging after the 100 days are up and try to go for a year of contiguous blogging? Who knows.
In any case, today was a pretty tech heavy day, so I guess that’s the direction that this post will aim.
This post is a continuation of the thread: You can tech if you want to… (Part 1 and  Part 2)
A couple of days ago, my current set-up expanded once again, with the introduction of a cheap cam and an audio interface.  Admittedly, I was thrilled for the addition, as the combination would allow for use of my mic, as well as improved video conference capabilities. However, before today, I hadn’t really had time to try them out.  That changed all changed though, thanks to our latest recording session for Sibling Summit this morning.
Recording:
Over the last 2ish months, Justin and I have been using Zoom as the platform for podcast audio recording, as it allows for a joint audio/video connection that promotes easy integration of other family members, and was readily available for use on my iPad.  We continued with this process today.
Upon joining the meeting, Justin immediately noticed a problem with my sound quality.  After several minutes of trying to troubleshoot through system and zoom settings, it was discovered that the problem was with my USB connection (until 2 days ago, I had no idea that the USB color made a difference…) I had plugged the interface into a 2.0 rather than a 3.1.  Switching this made all the difference.
The second problem was my video. I’d literally just put the cam on top of my computer – it never occurred to me that it would need individually focused (duh, Hannah. Don’t you work with optics every day?!)  Easy fix.  However, through the course of recording, it was decided that I probably should invest in some form lighting (which, was poor, secondary to my aversion to lights). For today, this was managed by pulling up our show notes out of dark mode, but I’ll probably look for something better in the future.
Discovery three was how closely dynamic/directional mics need to be to pick up sounds.   Which was mildly problematic, considering that my current set up and mic stand would require me to be approximately 6 inches from the screen to have my mouth close enough to the mic. For today, I chose to simply hold the mic throughout the recording session.  I may stick with this for a while, but someday, I’m sure I’ll switch to either an arm, or simply a taller stand for improved functionality.
After podcasting, I decided to attempt a few recordings of my own.  However, every time I tried to create a recording session in Ardour6, the program crashed.  Per Justin’s suggestion, I switched to Audacity.  I was able to lay down a couple of tracks, but I was quickly frustrated by the effort that it took to overlay the two (though, I didn’t read directions so, it’s probably something simple that I was just missing..)  Post NTT, I decided to go back to Ardour.
First, I tried Ardour5.  While it never crashed, I couldn’t get the system to accept separate input/outputs (which I currently need, as I don’t have the adapter to use my headphones w/the audio interface). Back to Ardour6.  More crashes.  Finally, I decided to switch to an empty template for recording, rather than a recording session.  It opened fine! Two recorded tracks later (with substantial editing yet to go), I decided to call it quits with music for the night.
Long story short, it’s probably obvious that I have a lot to learn about – well, everything tech related. And that I should really learn to read directions/listen to instructions/use tutorials.
But that’s a discussion for another day.
‘Til tomorrow,
-Hannah
Question of the Day: What’s your favorite DAW?
Challenge: Figure something out without directions!
Photo of the Day: 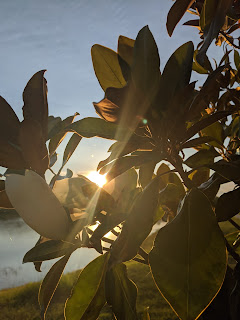