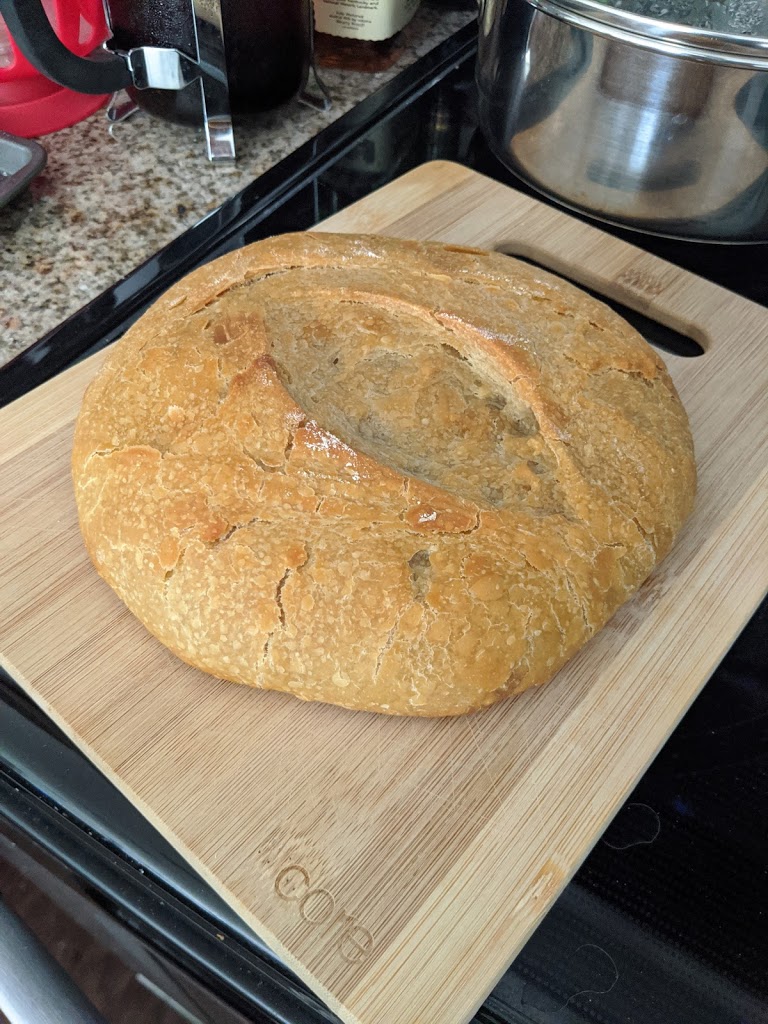 Guys – it’s Day 90 of #100DaysofHannah and #100DaystoOffload – only 10 more to go!
It’s an early (ish) post day, partially because I need to feel like I’ve done something with my life today, and partially because, why not?
But Hannah, you just said yesterday that you’re normally super productive in the mornings and late afternoons… what happened?
Well guys, today was a good distracted day.
When I was back home in Ohio, my mom and I had made homemade bread from a long-time family recipe (that, of course, I changed, because that’s what I do).  As always, it was delicious.
Upon returning to the South and having an incredible amount of free-time, I decided that I wanted to try to make bread on my own.
The catch?
I don’t own any proper bread making things.
Like bread tins.
Or a mixer – of any sort.
Or the towels that you put over bread when it rises.
Or windows that face the sun to help with the rising process.
Or even a whisk apparently.
During quarantine, however, I knew there had been a big push for making sourdough.  I had no idea what I was getting into, but figured that would be a nice, easy bread to start with.
*Insert laughter here from all of you who know anything about making sourdough bread*

As any good millennial would do, I took to the internet to see what I was up against, figuring that I’d start on the bread as soon as I got the necessary ingredients from the store.
*Keep laughing*

Which is when I realized that I was in over my head.
The first site I went to was for “Beginner Sourdough”.  How perfect!
I started reading…
-Sourdough starter
-Scale to measure ingredients
-Dutch oven
-24 hour long process
What?!  Surely this was an overachiever site.
So I went to another one.
And another.
And another.
Only to find that they all said the same thing.
As y’all have been with me for 90 whole days now, you’re probably aware that I’m not much of one for precision and rules – especially when it comes to the kitchen.
So, I went to the store, bought a bag of all-purpose flour, and figured I’d figure something out.
Worst case scenario? I was out $1.59 for the flour and a bit of time.

Apparently you can also buy the stuff, but in the midst of COVID, I wasn’t really all that keen on going out and trying to find sourdough starter at a store, so I found one of the recipes and gave it a go.
Though virtually all of the sites emphasized the necessity of precise measurements, I, of course, disregarded this, and found the closest approximates that I could find – 1 cup flour to just over 1/2 cup cool-ish water.  Mix and let sit for 24 hours.  Dump half at this time, and then re-feed mixture.  Repeat for 7-10 days.
Great.
About 6 hours in though, I started to see bubbles in my mixture.  It was working!
Eagerly, I ditched the 24 hour theory, dumped half the mixture into a jar that I put in the fridge, and re-fed the initial portion.
7-10 days? Psshh. They must not live in the south!

I don’t remember exactly when I re-fed on day 2.  It was probably 12 hours after the last feeding session?  Once again, I poured half the mixture into another jar that I stuck in the fridge, removed the previous fridge jar, and re-fed the initial.
Repeat for evening feeding, this time feeding the first day’s discard too.

Day 3 started out like every other day – feeding, discarding, yada, yada.  By this point, the initial mixture and first day’s discard were taking on a sour, yet fresh smell.
Success.
Which also meant that I started to get more impatient.
Early afternoon, I went to look at my sourdough starter(s) for approximately the 14th time that day.  The first day’s discard was perfectly bubbled so it looked like an airy/frothy sour mixture.
Overwhelmed by curiosity and tired of waiting, I pulled up a “Simple Sourdough” recipe and got to work.
1/2 cup starter
2 Tbsp oil
1 cup lukewarm water
2 tsp salt
2 3/4 cup flour
Whisk first 3 ingredients together, then add salt and flour until you can clean the bottom of the bowl with the dough.
My measurements, of course, weren’t exact, but does that actually matter?  Only one way to find out!
The dough was a bit sticky, but eventually it got to a consistency that I thought was reasonable.  Back into the bowl it went to rise for 12-18 hours.
About 6 hours in, I was beginning to become concerned that I had failed miserably, as the dough hadn’t risen at all.  By late evening though, I started seeing slight bubbling in the dough.  Fermentation success!

By morning, my previously presumed failure had risen another 2+ inches, nearly filling the bowl it was in – perfect!  After a walk and starting breakfast it was time to put this recipe to the rest of the test.
I quickly threw some flour on a piece of parchment paper (not my best idea in retrospect) and dumped the dough out of the bowl.
It was super sticky.  So I folded it as suggested with plenty of flour (maybe too much?) to strengthen the dough.
After folding it, I tried to mold the dough, but it still wasn’t keen on holding it’s shape.  Nevertheless, into the floured bowl it went (because I don’t own a bread basket).
The recipe called for 2.5 hours of rising time. However, when I checked on the loaf, it definitely hadn’t doubled in size.  At 4 hours in, it didn’t look like I had really made any progress, so I decided to just turn the oven on and go for it.
There were several options presented to try to achieve the crispy crust, soft interior – a dutch oven, trying to create steam in the oven, etc.
I don’t have a dutch oven, but figured any oven-friendly bowl with a lid would be sufficient, so I put it in the oven turned to 450F and waited.  Once temperature was achieved, I removed the pan, inserted the dough, (probably should’ve greased the pan…), scored the dough, decreased the temp to 400F, and put the pan with dough back in the oven.
It was supposed to take 50-60 minutes.  But, as could probably be expected, I don’t normally set timers either.  Annnd I’ve refused to reset the time on my microwave after 3 power failures in a week, so I really have no idea how long it sat.
But eventually, the bread had a golden brown crust, so I removed it from the oven to let it sit in the pan (with lid) for another… while (pretty much until I got too impatient to try it).

Considering I did almost everything wrong,  I was pleasantly surprised by the results!  The crust was perfectly crispy. And the loaf looked surprisingly presentable. It didn’t rise as much as I had hoped, so the bread itself was more dense than it’s probably supposed to be, but the taste was phenomenal!
Success? I’d say yes.
Which means that, of course, I have another batch of dough prepping presently!  This time I decided to try a whole wheat loaf instead.  Thus far, it’s holding it’s shape much better than the first, so we’ll see how it continues to rise, and what the end product yields – I’ll keep y’all posted 🙂
‘Til tomorrow,
Hannah
Question of the Day: Do you have any fun baking stories?
Challenge of the Day: Try your hand at making bread!
Photo of the Day: Finished sourdough loaf #1 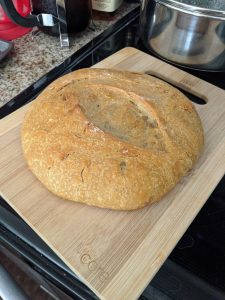