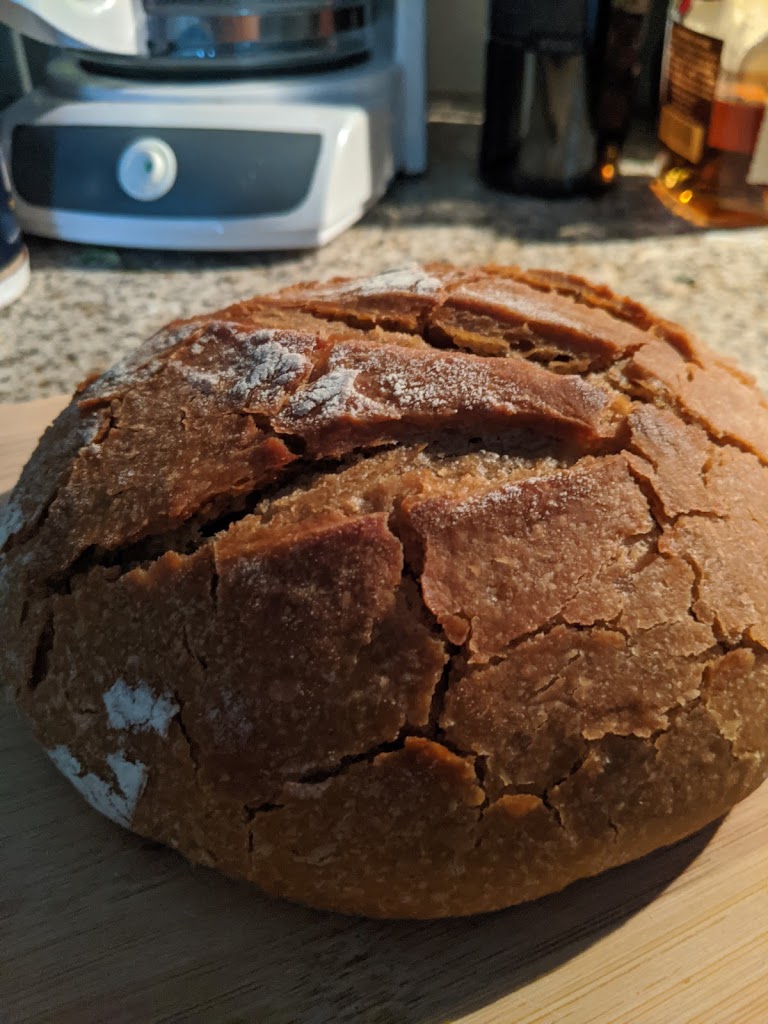 What to talk about on Day 91 of #100DaysofHannah and #100DaystoOffload?
Today’s been a bit of a chill day, for better or worse.  I had planned on writing more substantial posts for my last 10 days of this challenge, or at least attempting to.   But now that blogging time is here, I’m not sure what to say.
Or maybe that’s an indication that it’s not supposed to be blogging time.
Who knows.
As Tropical Storm Hannah has officially moved in though, it would seem that my normal evening walk is cancelled, so why not blog?
Today, as promised, I made my second loaf of sourdough bread – a whole wheat loaf.  Before coming up to blog, I finally removed it from the pan that I’ve been using for baking, and was pleasantly surprised by the results.
Once again, prior to baking, the loaf hadn’t seemed to rise that much. However, from the start, this loaf was much better at holding its own form.  This quality held true through baking, and allowed the loaf to rise a little bit more.  I changed the design that I scored in the top this time (still keeping it simple).  I’m not sure if that was the differentiating factor, but the top crust was much flakier today.
I opted to not try the bread yet tonight – I’ve had enough to eat for today (the problem of baking when you’re single) – so I’ll have to report back on the flavor tomorrow.
Since I had a substantial amount of starter discard today that I didn’t feel like using to make yet another starter, I decided to combine it and put it in a single discard jar for later use.
Which obviously meant that I had to try to make sourdough cookies this evening as well. Wanting to gain a better understanding of the process, I decided to just jump in and throw ingredients together rather than actually following a recipe (go figure).
Admittedly, my recipe-less cookie recipe needs a bit of help.  The cup of sourdough starter plus whole wheat bread and minimal sugar was probably my greatest downfall, as they’re not exactly… sweet?  However, they’ve got a decent cake-like texture that I think I’d be okay sticking with (maybe I’ll drop that a little bit?)
Tomorrow’s (tentative) adventure is going to be adding herbs/spices to the whole wheat loaf that I currently have proofing.  And maybe trying the cookie recipe again?  We’ll see if Hannah leaves me with power… Here’s to hoping!
‘Til then,
Hannah
Question of the Day: Does anyone else just like messing with recipes to see what happens?
Challenge of the Day: Do a new workout!
Photo of the Day: My First Whole Wheat Sourdough Loaf! 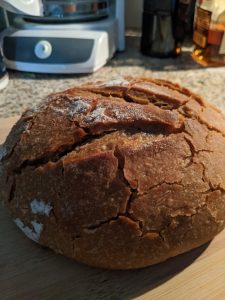