Since it’s the middle of the week, how about we start out easy:

How many of you know someone (either a friend or a relative) who has had cataracts?

Hopefully, unless you live under a rock or are under the age of 15, you all know of at least one person who has, or has had, cataracts.

Surprisingly, even though most of the world knows of someone with cataracts, few people seem to know of what they are, or what they mean for you and your vision.

Case in point: one of the optometry groups that I follow on social media posted yesterday how they had just finished telling a patient that he had cataracts, only for him to report that they told him he had cancer!

While this may seem like an extreme interpretation, I’ve had many patients who are convinced cataracts are equivalent with a visual death sentence (and also the occasional few who are convinced they have a “Cadillac” in their eye…)

Considering the number of misconceptions that exist, I’ve decided to use today’s post to discuss cataracts, and hopefully dispel some common myths!

First things first (someone should start tallying up how often I say that…): ocular anatomy.

Okay, in the lovely picture above, you can see all the major components of the eye.  Our focus for today is the lens, which sits right behind the iris, or colored part of the eye.

The role of the lens in your eye – like every lens really – is to focus light to create a clear image.

However, unlike lenses for your camera, or lenses in your glasses, or contact lenses that you put on your eyes, the natural lens of your eyes is made up of cells, proteins, and fibers!  Together, these components come together to form distinct layers of the lens (as shown below). 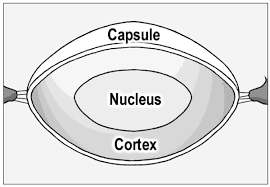 Because of its cellular makeup, your natural lens changes over time – adding layer after layer through the years!

Unlike other parts of your body, however, the natural lens of your eye is sanctioned off from the rest of the eye by the capsule – which is essentially an elastic bag that holds the lens (epithelial) cells and lens fibers in place.  While this layer does an excellent job at protecting the lens from viruses and bacteria, it also prevents any of the layers from being lost.  In other words, the lens fibers that you’re born with are still in your eye when you’re 50!

Which is all well and good, until something causes a structural change in either the lens cells or lens fibers, resulting in opacification (clouding) of the lens.

Okay, this is an exaggeration, but there are many different reasons for the formation of cataracts!

Some common ones are:

Nuclear cataracts are one of the most common type of cataracts.  This type of cataract originates in the central part (nucleus) of the lens, and is most commonly associated with increased age. What initially starts out as a browning (brunescence) with slight clouding, can eventually become the milky white cataract that you see in the bottom right picture!

Cortical cataracts are admittedly some of my favorite to see in patients – they can look so pretty!

These cataracts start from the outside and gradually work their way in in a spoke-like pattern, as shown above.  Cortical cataracts can also be associated with age, but additionally have a higher incidence in patients with diabetes. 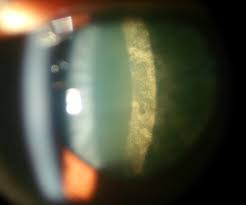 As indicated by the name, posterior subcapsular cataracts involve an area of the lens just ahead of the posterior (back) portion of the lens capsule.  This type of cataract generally begins as a small, cloudy area, but eventually enlarges to cover more of the back portion of the lens.  Interestingly, posterior subcapsular cataracts generally have the most visually significant changes over a short period of time – potentially altering vision within just a few months!  Like cortical cataracts, these are more common in patients with diabetes, however, they are also associated with steroid use, a highly near-sighted prescription, and some ocular diseases.

Despite there being many different causes and types (I only listed the top 3) of cataracts, most people report similar symptoms:

Chances are (if you’re still reading at this point) that you’re thinking some variant of:

“That’s great, Hannah.  But, what I really care about is what to do about them!”

Unfortunately, as it currently stands, there is only one form of treatment for developed cataracts: surgery.

Which is normally the part where people freak out, and I get it!  I’m personally not particularly thrilled by the notion of any type of surgery.  However, before your amygdala grabs you, let’s take a moment to discuss cataract surgery.

First up: cataract surgery is the most commonly performed ocular surgery, and one of the most common surgeries in the world! (I tried to find specific stats, but came up somewhat empty handed.  In 2015, over 20 million cataract procedures were performed worldwide, with somewhere around 3.6 million in the US alone.)

In this outpatient procedure, your cataract surgeon removes the natural lens from your eye (while leaving part of the capsule intact if possible) and inserts a new, synthetic lens that is calculated to fit your visual needs in its place!

Sometime after the initial cataract surgery, many people end up getting a “secondary cataract”, when some remaining lens cells migrate and cover the intact capsule.  Thankfully, this condition is also easily treated; your ophthalmologist (or optometrist in a select few states) simply uses a laser to open up the capsule and restore clear vision!

There are many more topics related to cataracts and cataract surgery that could be discussed, but for today, I’ll call it good!   If you have any questions or comments, please contact me – I’d love to hear from you!

One thought on “Optometry in Focus: Cataracts”